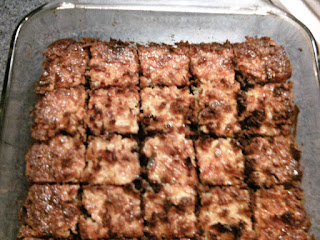 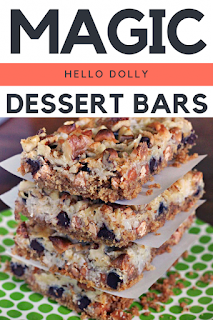 Though the original recipe was called Hello Dolly Cookies, there were other names used sometimes: Magic Cookie Bar, and Seven Layer Cookies. The names were different, but the recipe was the same. What makes this cookie an original is that the recipe is only made with graham cracker crumbs, semi-sweet chocolate, coconut, pecans, and sweetened condensed milk. Recipes that have followed through out the years have change with adding walnuts, white chocolates, butterscotch chips, and etc.
In the case of this cookie, the original recipe is made by layering condensed milk, chopped nuts, semi-sweet chocolate chips and sweetened coconut on top of a tender, buttery, graham cracker crust.

History say's the recipe became famous during the 60′s when Hello Dolly was on Broadway. During the show, there is a restaurant scene. Clementine Paddleford’s (our countries first food journalist, the original foodie!) food column in “The Week “ magazine on September 19, 1965 featured a “Hello Dolly Cake” which an 11 year old girl borrowed from her grandmother. The recipe included graham cracker crumbs, flaked coconut, chocolate chips, chopped nuts, and condensed milk.
19 September 1965, Syracuse (NY) Post-Standard, “Clementine Paddleford Recipe Swap,” This Week magazine, pg. 20, col. 2: “Hello Dolly” Cake: ALECIA LEIGH COUCH OF DALLAS, TEXAS, 11, is today’s youngest. She sends a cake recipe borrowed from her grandmother, who cooks young, too. The “Hello Dolly” name was Alecia’s idea. “No need even to mess us a bowl,” Alecia writes, “and that’s the big reason why I call this my favorite cake recipe. And of course it’s good!” 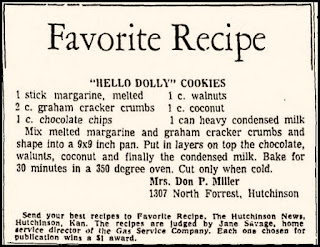 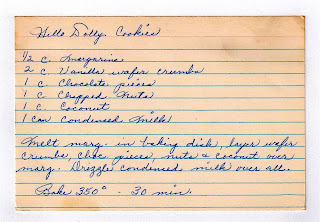 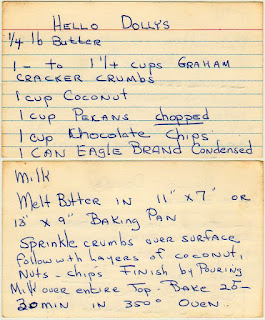 Instructions:
Preheat oven to 350F.
Melt butter in a small bowl in the microwave on high for 30 seconds. Combine graham cracker crumbs with the melted butter. Place in an 9″ X 9″ baking dish. Pat the crumb mixture down evenly with your hands.
Layer the chocolate chips, walnuts, and coconut on top of the graham cracker mix. Pour the sweetened condensed milk evenly over the entire mixture.
Bake for 30 minutes, or until the top is light brown. Let cool completely before slicing. 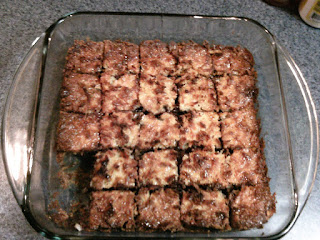 Here are 2 more even earlier Recipes. 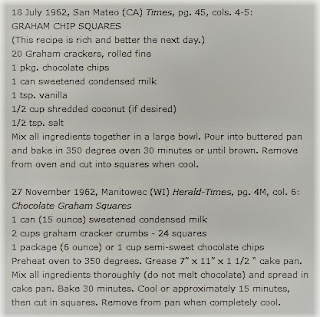