The History of Shortbread, and a very old Recipe 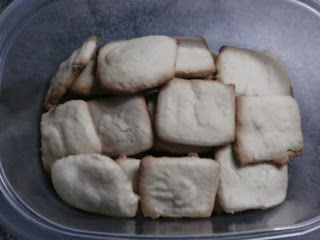 Shortbread is a type of cookie with a high butter content: The traditional recipe is one part sugar, two parts butter and three parts flour. It has been called the ancestor of all butter cookies. The original shortbreads were made with oatmeal, white flour came later and lightened the cookie. The addition of rice flour gives shortbread a grainy, crumbly texture, while cornstarch (corn flour) gives it a more dense texture.

Shortbread originated in Scotland in medieval times. Scottish shortbread evolved from medieval biscuit bread, a twice-baked, enriched bread roll dusted with sugar and spices and hardened into a rusk. Eventually, butter was substituted for yeast, and shortbread was born. Shortbread may have been made as early as the 12th century, but its invention is often attributed to Mary, Queen of Scots (1542-1587) in the 16th century. She had a team of French chefs who had the time, labor and ingredients to perfect the recipes. Shortbread recipes first appear in cookbooks of the time, although origination often precedes the first reference in print by a significant number of years. The following is an early 18th Century for traditional Shortbread
Ingredients:
2 1/4 Cups of Flour
1 Cup (2 sticks) of Butter
1/2 Cup of Sugar 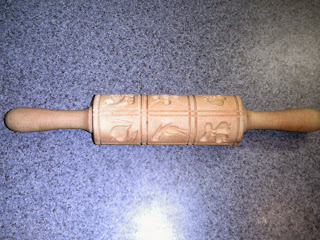 Instructions: Preheat oven to 350 F Cream butter, and sugar. Slowly add the flour, and knead on floured surface, Form into a roll, and chill for 2 hours. Remove, and roll out on to a floured surface. If you are using a springerle rolling pin as pictured, you will spread out the dough before rolling with this pin. After rolling, and transferring the imprinted mages into the dough, cut and place upon a foil lined cookie sheet. Bake at 350 F. for 12 to 18 minutes, until the edges are light brown. 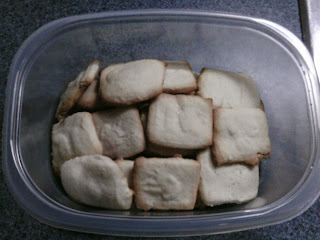 As you can tell by the list of ingredients, this is a very easy recipe to make, and I can tell you it has been enjoyed by many. Let me know how it turns out for you.
Posted by davids ghost at 10:01 AM No comments: 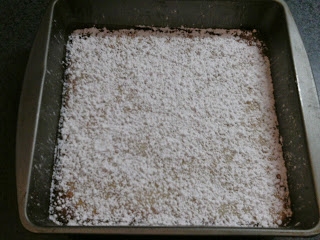 Lemon Squares Just a little history... Citrus curds have been popular for about 125 years and shortbread for much more than that, but it was none other than Betty Crocker that invented the lemon bar, They published the first known printed recipe in 1963. 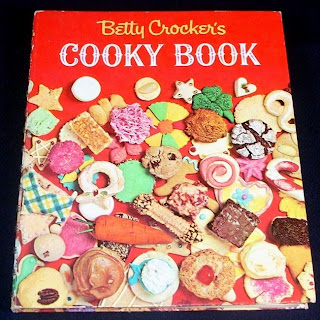 Ingredients:
Crust:
1/2 cup (1 stick) of Butter
1 cup All-Purpose Flour
1/4 cup Confectioners' Sugar
Topping:
2 large eggs
1 cup Granulated Sugar
2 tablespoons of Lemon Juice, Fresh is best.
1/2 teaspoon of Baking Powder
2 tablespoons All-Purpose Flour
Instructions:
Preheat your oven to 350°F.
Cut the butter into the flour and confectioners' sugar and press into a 9-inch square pan. Bake 20 minutes or until light brown. Combine the topping ingredients. When the bottom is done, and still hot, pour the topping over it and continue baking for about 25 minutes. Let cool, and sprinkle top with confectioners' sugar. 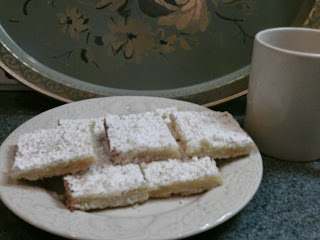 It's a wonderful treat that brings back so many memories for all of us. Please let me know if you try it out. I think you will be as pleased as I was.
Posted by davids ghost at 7:36 AM No comments: