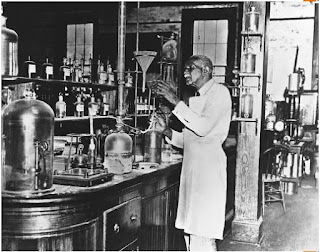 As we have all heard, George Washington Carver (1864-1943), an American agricultural extension educator, from Alabama's Tuskegee Institute, was the most well known promoter of the peanut as a replacement for the cotton crop, which had been heavily damaged by the boll weevil. He compiled 105 peanut recipes from various cookbooks, agricultural bulletins and other sources. In his 1916 Research Bulletin called How to Grow the Peanut and 105 Ways of Preparing it for Human Consumption, he included three recipes for peanut cookies calling for crushed/chopped peanuts as an ingredient. It was not until the early 1920s that peanut butter was listed as an ingredient in the cookies. 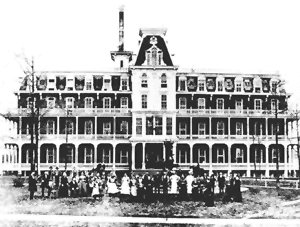 The first to patent peanut butter was Marcellus Gilmore Edson in 1884. John Harvey Kellogg later patented a "Process of Preparing Nut Meal" in 1895 and served peanut butter to the patients at his Battle Creek Sanitarium.
The first peanut butter cookies recipe, by Mrs. Rorer’s New Cook Book (1902, Philadelphia, Pennsylvania), suggested rolled peanut butter ball. Later a recipe for patterned Peanut Butter ball, which instructs the cook to roll the dough into balls and press them down with the tines of a fork, was published in 1933 edition of Pillsbury's Balanced Recipes.
The New England Kitchen Magazine (Vol. 3 No. 4, July 1895, pp 184-185) printed an article titled “An American Delicacy”. It gave a short history of the early use of peanuts and popular uses, but peanut butter was not mentioned. The idea of nut butter, peanut butter being one of the various nuts used to make nut butter had emerged about ten years earlier but was not yet publicly available. Nut butter was used in commercial candy making. What was found in the article was a recipe that was the precursor of the Peanut Butter Cookie. 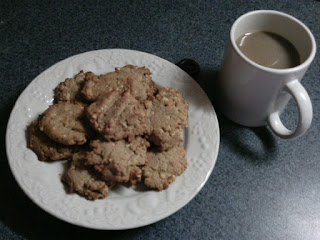 The 1895 recipe is, as follows:
Peanut Cookies
1 tablespoon of butter
Pound or chop one cupful of peanuts
1/2 cup sugar
1 egg
2 tablespoons milk
1 cup flour
1 teaspoon salt.
Mix the ingredients, and bake at 350 F. until golden brown.
The ingredient list with the exception of a higher amount of peanuts is similar to the early peanut cookies which used peanut butter. The article listed a U.S. Department of Agriculture pamphlet Farmers Bulletin, No. 25 and Miss Juliet Corson as two early contributors to uses of peanuts. So it is unknown who developed the “Peanut Cookies” recipe listed in the New England Kitchen Magazine article. 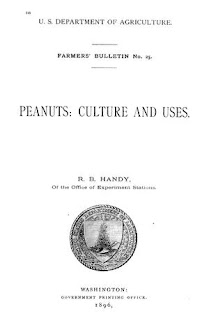 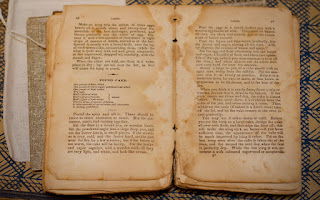 Pound cake refers to a type of cake traditionally made with a pound of each of four ingredients: flour, butter, eggs, and sugar. 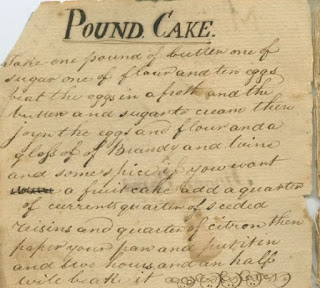 Pound cake is usually baked in a loaf pan or a Bundt mold, and served either dusted with powdered sugar, lightly glazed, or sometimes with a coat of icing. It is believed that the pound cake is a Northern European dish, that dates back to the early 1700s. Over time the ingredients for pound cake changed. Eliza Leslie, who wrote the 1851 edition of Direction for Cookery, used 10 eggs, beat them as light as possible, mixed them with a pound of flour, and added the juice of two lemons or three large oranges. Certain countries and regions having distinctive styles. These can include the addition of flavouring agents (such as vanilla extract or almond extract) or dried fruit (such as currants or dried cranberries), as well as alterations to the original recipe to change the characteristics of the resulting pound cake. Pound cake is more commonly known in Britain as sponge cake, usually made from butter, caster sugar, self-raising flour and eggs in equal parts. Vanilla extract can be added to give a richer taste. 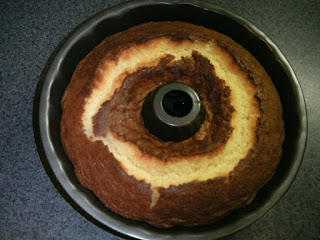 The following is one of those variations, this one uses less of all ingredients, but taste just as good as the traditional Pound Cake.
Ingredients:
1 Cup (2 sticks) of Butter
3 Cups of Flour
1/2 Teaspoon of Baking Powder
1/2 Teaspoon of Salt
3 Cups of Sugar
1/2 Cup of Vegetable Shortening
1 Cup of Milk
1 Teaspoon of Vanilla
5 Eggs
1/2 Teaspoon of Almond Extract (optional)
Directions:
Preheat oven to 350 degrees F.
With a mixer, cream butter and shortening together. Add sugar, a little at a time. Add eggs, 1 at a time, beating after each addition. Stir dry ingredients together in a bowl and add to mixer alternately with milk, starting with the flour and ending with the flour. Mix in vanilla. Pour into a greased and floured tube pan and bake for 1 to 1 1/2 hours, until a toothpick inserted in the center of the cake comes out clean.
Posted by davids ghost at 4:31 PM No comments:

Old newspapers are a great source for finding Vintage Recipes. Listed below are recipes that were taken from old Willimantic/Windham County Connecticut Newspapers. They, for the most part, are from the 1880's. A time when everyone did their own cooking, and baking. I hope you enjoy this little trip back in time, and even try a few of these on your own. You may like them! 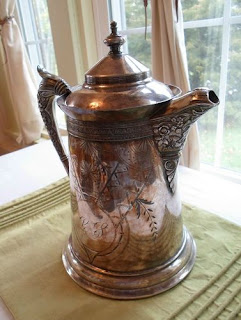 GOOD COFFEE (1882) – Put a sufficient quantity of coffee in the pot and pour boiling water on it; stir and place it on the fire. As soon as four or five bubbles have risen take it off the fire and pour out a teacupful and return it; set it down for one minute, then pour gently over the top one teacupful of cold water; let it stand one minute longer and it is ready for use. 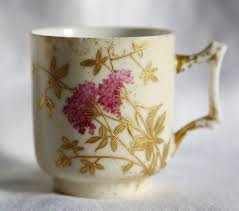 Now that we have made our coffee, we can get conjurer up something to go with it.
APPLE JAM (1880) - Peel and core the apples, cut in thin slices and put them in a preserving kettle with three-quarters of a pound of white sugar to every pound of fruit; add (tied up in a piece of muslin) a few cloves, a small piece of ginger and a thin rind of lemon; stir with a wooden spoon on a quick fire for half an hour Now we need something to put the Apple Jam on. 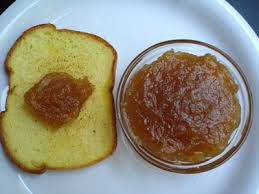 JOHNNY CAKE (1881) - Take one quart of buttermilk, one teacup of flour, two-thirds of a cupful of molasses, a little salt, one tablespoonful of saleratus, one egg (beaten of course). Then stir in Indian meal, but be sure and not put in too much. Leave it thin--so thin that it will almost run. Bake in a tin in any oven, and tolerably quick. If it is not first-rate and light, it will be because you make it too thick with Indian meal. Some people prepare it without the molasses. 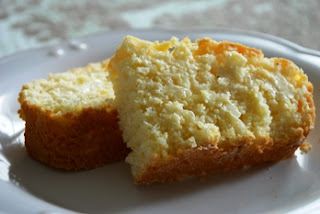 Or we could get adventurous. 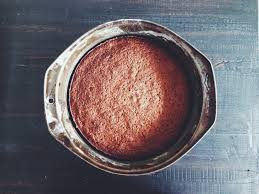 A GOOD PLAIN CAKE (1881) - Take six ounces of ground rice, the same of flour, the yolks and whites of nine eggs beat separately, one pound of loaf sugar well pounded. Whisk the sugar and eggs for nearly an hour, then add the rice and flour. Butter well some white paper and put round it and over the bottom of the tin it is to be baked in, and bake in a slow oven. Run a knife into it; if it comes out clean it is baked enough. 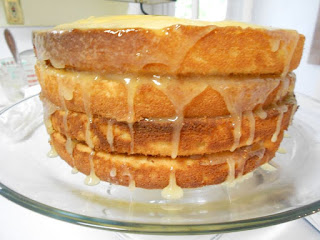 LEMON JELLY CAKE (1881) - A delicious lemon jelly cake which will keep well, and which is in fact better after having been kept for a week, is an easily obtained luxury. Take two cups of sugar, half a cup of butter, one cup of milk, three eggs, two and one-half teaspoonfuls of baking powder, and three cups of flour. This makes five layers. For the jelly use the grated rind of two large lemons and the juice also, one cup of sugar, one egg, half a cup of water, one teaspoonful of butter, one tablespoonful flour mixed with a little water; boil until it thickens and then place between the layers of cake.
Or maybe you would like something a little lighter? 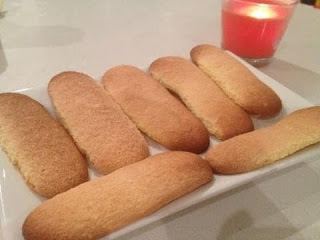 LADIES' FINGERS (1881) - The following recipe for ladies' fingers is an excellent one: Take one pound of pulverized sugar, one dozen eggs, three-quarters of a pound of flour. Beat the yolks and sugar to a cream, then beat the whites, and lastly stir in the flour; flavor with lemon. Bake in long, small tins made expressly for these little cakes, or you may drop them on white writing paper; they are likely in this case, however, to look irregular about the edge. Be careful not to put too much dough in the tin as it will rise a good deal. Have the oven hot and success is certain.
I hope you enjoy these recipes, and your 1800's Tea Party! 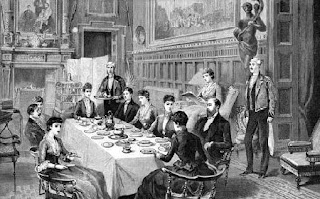 Posted by davids ghost at 10:44 AM No comments: 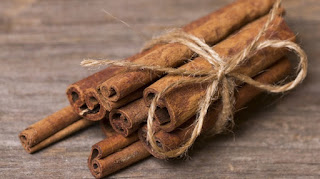 This is definitely an easy cookie to make, and it is also sure to become a favorite for your cookie eaters, as it was for mine. It's a Cinnamon drop cookie, and it was truly a delight for all who tried it. 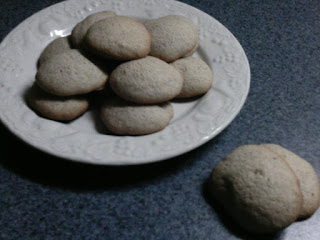 Ingredients:
3 cups all-purpose flour
1/2 teaspoon salt
1 tablespoon ground cinnamon
1 cup (2 sticks) butter
1/2 cup brown sugar
3/4 cup granulated sugar
1 egg
1 teaspoon pure vanilla extract
Instructions:
Preheat the oven to 350°F
In a medium bowl, whisk the flour, salt, and cinnamon together and set aside. Cream butter and both sugars until light and fluffy. Beat in the egg, vanilla, until the egg is completely incorporated. On low speed, slowly beat in the flour mixture, then increase the speed to medium and beat the dough until thoroughly blended. Drop by small round teaspoonfuls on to foil lined cookie sheets, and bake at 350 F for 10 to 12 minutes. 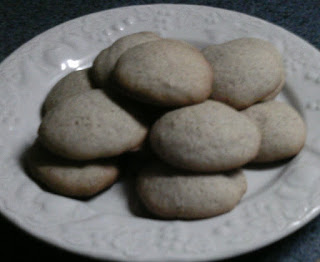 Posted by davids ghost at 7:16 AM No comments: